JCB go wireless to take full control of chassis production - "…scrapping an assembly is simply not an option.";

In a corner of its sprawling factory, just outside the town of Cheadle in Staffordshire, UK, world-famous earthmoving, construction and agricultural vehicle manufacturer JCB has invested £2 million in a machining cell that brings together the best of the UK's precision engineering innovation, including CNC machine tools from Asquith Butler and wireless machine probing from Renishaw.

Alongside the busy welding area for JCB's large wheeled loader front chassis sit a pair of enormous Asquith Butler CNC moving-column horizontal milling machines. The more conspicuous of the two is the shiny new one, centre stage under the powerful beams provided by two halogen lamps suspended from the factory roof, 5 metres overhead. With a flurry of activity belying its size, the machine changes tools and moves its spindle to within a few millimetres of a 1.5 metre high, welded steel chassis assembly mounted on its table. It pauses briefly, then rough-bores a fist-sized hole.

“By the time they're ready for final machining, these front chassis assemblies weigh around 2000 kilos and represent a substantial amount of work and material,” shouts Senior Manufacturing Engineer Chris Goodall, straining to be heard above the din of carbide on steel, “making a mistake during machining and having to scrap an assembly at this stage is simply not an option.”

Dwarfed by the size of the machining centres, and almost out of sight to the casual observer, is a relatively small piece of technology without which Chris Goodall's working day would be considerably more stressful. As the man responsible for the company's in-house machining operations, Goodall's peace-of-mind depends on a Renishaw RMP60 touch probe with radio signal transmission. It is thanks to the probe that he and his colleagues know that the machine cutter will find the part exactly in the expected location, day after day, part after part.

“The large wheeled loader front chassis is a massive, complex, three dimensional welded steel assembly,” continues Goodall. “Although we very rarely have a problem, we can never guarantee the accuracy of the chassis when it arrives from the fabrication shop. Each one must be individually measured and the machine's coordinate system must be updated so that any variation is taken into account before machining begins.”

An overhead crane positions the heavy chassis on the machine table and a technician bolts it securely. Once in position, the Asquith Butler is programmed to select the Renishaw touch probe and measures a series of critical reference points, transferring the data via radio signal directly to the machine's Heidenhain 430M control system. The machine controller simultaneously compares the data received to the pre-entered part specifications. If the measured part dimensions are outside the parameters, an alarm will sound, warning the machine operator that the part cannot be machined within specified tolerances.

“We don't want to waste machine time on a part we're going to have to reject anyway,” says Goodall. If the datum points are within tolerance the machine controller automatically inserts them into the appropriate registers in the control so that they can be used by the NC program pre-loaded in memory. Whilst the inspection is going on, another technician is offloading the finished chassis on the moving column machine's second table.

“It's actually rather easy using the Renishaw RMP60,” says Goodall. “It measures the assembly in a matter of minutes and we can begin machining very soon after. Total cutting time takes between 1.25 and 2.5 hours, depending on the assembly.”

The touch probe's compact radio-transmission design allows it to access and measure any point on the assembly that the machine head can reach. Which is just as well; some of the measurement points are located in very tight spots.

“Our engineers were initially quite concerned about reaching all the areas on the chassis that we need to machine. But, because it uses radio transmission, the Renishaw probe makes part access much easier. Asquith Butler chose the probe and guaranteed full parts accessibility for our application,” explains Goodall.

Hinchliffe, Managing Director of Asquith Butler Ltd, explains why the company specified the RMP60 touch probe for the JCB application. “During the planning stage of the project it occurred to us that the new machine would be located close to the welding area and that there was a very real possibility of signal interference,” he says, “so we needed a system that could cope with the conditions. The Renishaw RMP60 is the first inspection probe to use frequency hopping spread spectrum (FHSS) data transmission.” 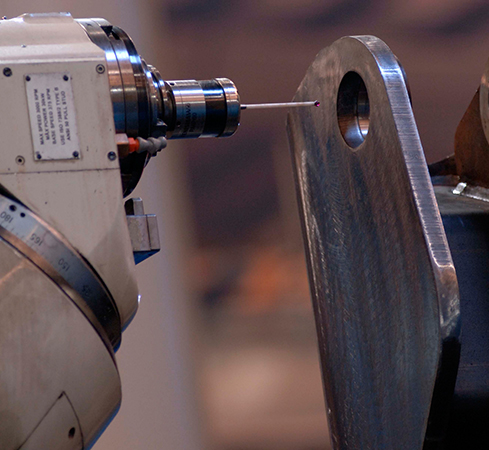 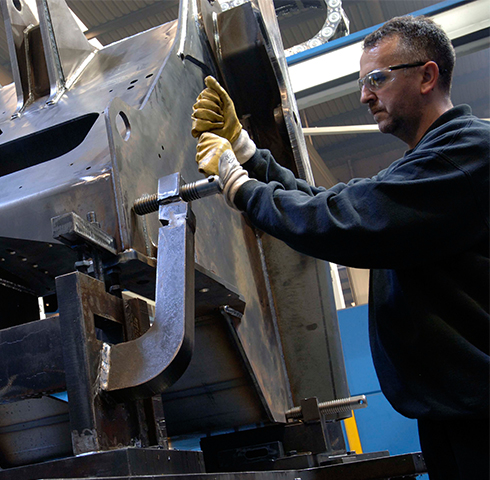 The RMP60 system consists of two separate devices: the probe and the RMI, which is a combined interface and receiver unit. The probe is brought into contact with the part and transmits data via radio signal to the RMI mounted on the machine enclosure and hardwired into the controller.

Unlike conventional radio transmission, the RMP60 touch probe system does not operate on a fixed channel. Instead the receiver ‘hops' through a sequence of frequencies in the 2.4 GHz band. This unique solution enables even multiple probes to be used with confidence in heavy industrial environments, even those afflicted by debilitating levels of radio interference.

Renishaw's innovation ensures that the vital feedback signal from the touch probe arrives intact and without interruption to the Heidenhain machine controller, and production can proceed unhindered. “Before we invested in these two machining cells, I personally had no prior experience of cutting metal on this scale,” says Goodall. “I was assigned responsibility for putting the process in place and I think we chose well. The Renishaw RMP60 system has shortened make-ready time dramatically and brought guaranteed precision and quality control to the chassis production process, whilst all but eliminating the possibility of costly errors."